The smartphone revolution has well and truly disrupted the world of banking. A wide range of startups have cropped up that have completely removed the need to make visits to physical branches to open accounts, make deposits, pay for things, and ask for loans: you can now do all of these on the go by way of a simple tap on an app.

Now, in the latest development, a new startup is leveraging that progress to create a new service targeting one of the most avid demographics when it comes to smartphone usage. Step, which builds mobile-based banking services for teenagers, is today announcing a round of $22.5 million led by Stripe. 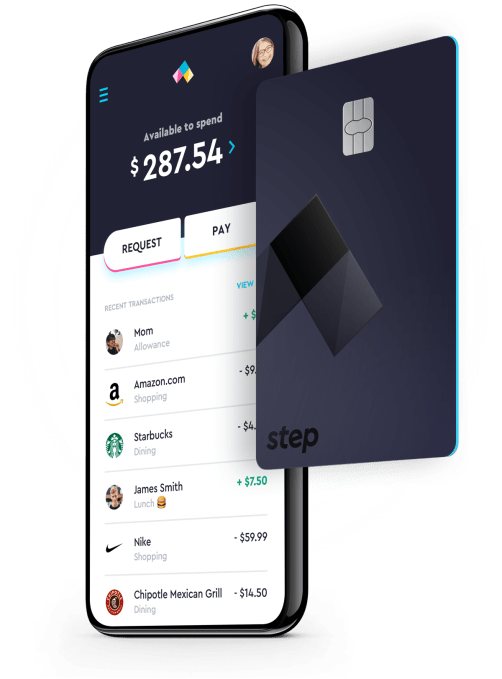 “Schools don’t teach kids about money,” CJ MacDonald, the CEO and co-founder, said in an interview. “We want to be their first bank accounts with spending cards, but we also want to teach financial literacy and responsibility. Banks don’t tailor to this, and we want to be a solution teaching the next generation of adults to be more responsible with money in the cashless era. It was easy with cash to go to the mall but now everyone is using their phone for Uber and more.” (MacDonald has a track record in mobile commerce applications: his previous startup, mobile loyalty card app Gyft, got acquired by First Data.)

Step’s first market will be the US, where it’s estimated that there are just under 50 million teenagers in the population.

MacDonald said the aim with the funding will be to use it to bring Step’s first product — banking accounts with payment cards attached — to market, in partnership with Mastercard and Evolve.

Step actually launched in January this year (when its card partner was actually Visa) but only to unveil a waitlist. Since then, it has amassed 500,000 names of interested would-be users — likely one reason why it attracted this funding, and the attention of a pretty high-profile set of investors, including several who know a thing or two about the youth market.

Step is not wading into unchartered territory by building a banking service targeting teens. Banks have been offering people the ability to open accounts for their kids under the umbrella of their accounts for many years. And other startups that have built banking services for this age group, who already have products out in the market, include teen debit card and bank app Current, and Greenlight, which makes a debit card for kids. (And that’s before you consider the likes of Chime, which don’t target teens specifically but might be used by them.)

And nor will Step be the last: there have also been rumors that Amazon has been working on its own service offering bank accounts to teens.

MacDonald said there are differences between what Step and these others are offering. First and foremost, its primary point of engagement is the teenager him/herself, with the aim being to give the account holder full autonomy (or at least the feeling of it: parents can still monitor and put controls on an under-18 account, as well as pay funds into it).

To that end, Step has been marketing directly to its future users, doing viral things like incentivizing sign-ups by giving users a dollar towards their bank accounts (when they come online) for each person that gets referred and also signs up using a person’s code. Teenagers under 18 will even be able to sign up for accounts without parental or guardian consent — although these accounts with be very limited in their functionality.

Another key difference will be the business model around which Step is built. As with any company that provides card services, Step gets a cut from card transactions, but unlike others in this space (and unlike most banks), Step is launching with a no-fee model for the basic account. This is because the idea will be to grow with the users, and over time to offer them services that will collect fees, when they are needed.

“As teens grow up we want to grow with them,” MacDonald said. “We will start offering products when they go to college, for example lending money to get books or computers.”

Stripe’s investment for now appears to be mainly a financial one in terms of the services that will be coming in the first wave of Step’s rollout this year. Behind the scenes, it’s actually strategic, too: the company has been quietly building interesting inroads into developing services for card issuers, alongside the services for merchants that you might already know. That’s included the acquisition of Touchtech earlier this year.

Step’s service will be very dependent on building out, and using, robust APIs to let parents and companies pay into their accounts, and for people to be able to use their Step accounts to pay for things, and part of that will involve using and implementing card issuing APIs.

“We are working with Stripe on its issuing API and on developing the issuing side of its business,” MacDonald said. “That is something that we are excited about.” More generally, he said their goals are aligned. “They want to grow the GDP of the internet and grow businesses online. Part of what we are trying to do is to make young people participate responsibly in the online economy, and I think that mission is in line with Stripe’s.” (Stripe declined to provide a comment for this story.)

The bigger opportunity also seems to be that much larger and more incumbent organizations will tap into what Step is building so that it can make sure to remain relevant and a part of whatever shape financial services take for so-called “generation alpha.”

“Today’s young people are digitally savvy, having grown up with technology as a mainstay in their day-to-day lives. As a result, we also need to ensure that they become familiar with the unique aspects of digital payments including providing education about the various finance and payment products available,” said Sherri Haymond, EVP Digital Partnerships, North America for Mastercard, in a statement. “Step has taken a thoughtful approach to developing an offering for teens and families that provides that first step in educating and acclimating today’s youth to help them gain confidence and awareness around their finances.”

Email Marketing Trends and Strategies for 2019