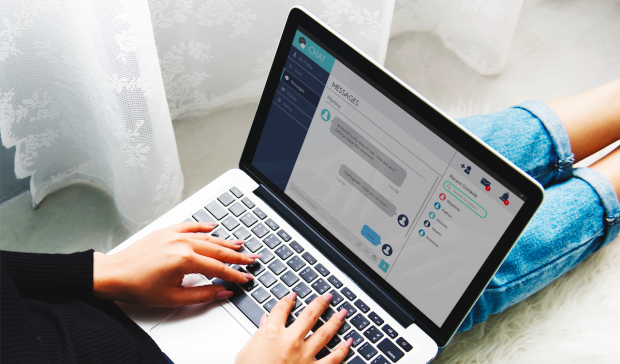 Chatbots are hot in digital marketing. Why is this the case and why should you care as a PPC marketer? Here’s a quick but complete primer on PPC chatbots.

Chatbots are red hot in the digital marketing space. In fact, Gartner estimates that 25% of all customer interactions will take place through a chatbot by 2020. Why is this the case and why should you care as a PPC marketer? Here’s a quick but complete primer.

What is a Chatbot?

A good starting point for any discussion about chatbots is the definition. Most people define chatbots like this:

A piece of software that mimics human conversations, generally to facilitate a trade of information or services between a business and their customers.

While this definition is certainly correct, it belies much of the nuance that exists in the space. There are two distinctions within the broader set of chatbots that every marketer should be aware of before diving into the technology: 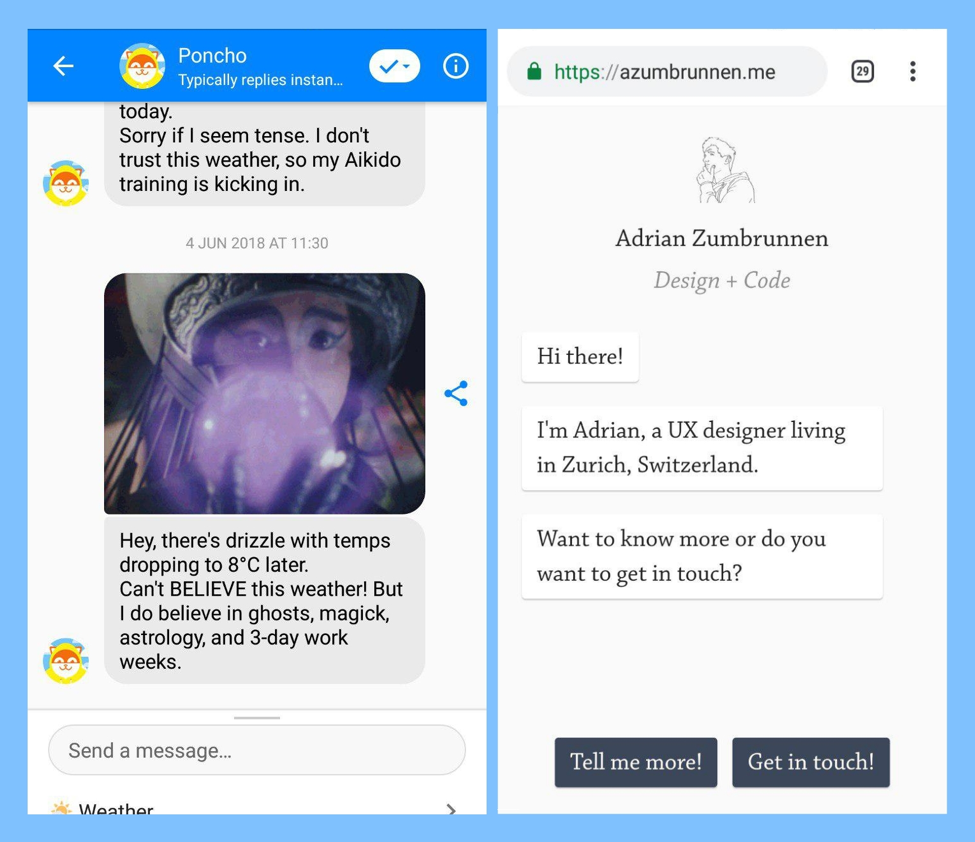 Microsoft research recently published a report that divided chatbots into two types: chit-chat bots and goal-oriented bots. Chit-chat bots generally have an open input field where users can say whatever they want and in response the chatbot tries to keep them engaged, presumably by giving them an appropriate answer. Most chit-chat bots tend to be novelty bots that try to hold basic human conversations, share trivia or make jokes. A great example of this is Eliza, one of the first ever chatbots created at MIT in the 60’s which simply tried to hold a conversation: 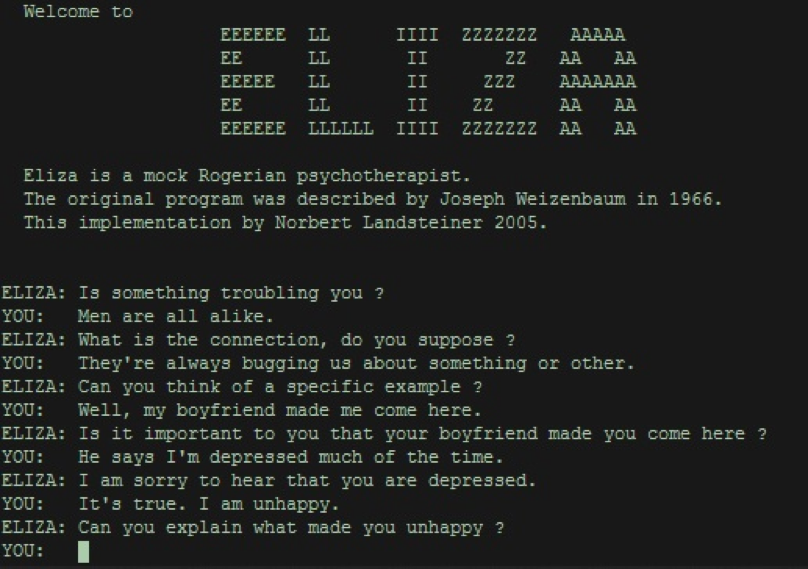 Goal-oriented bots however, don’t have the broad conversational approach that chit-chat bots have. They focus on helping users achieve a single, often utility-oriented goal and they often have input UI’s created specifically for achieving their goal. A great example of this can be found in the lemonade app, where a bot named Maya helps you get renter’s insurance through a  hyper-focused, goal-oriented conversation. 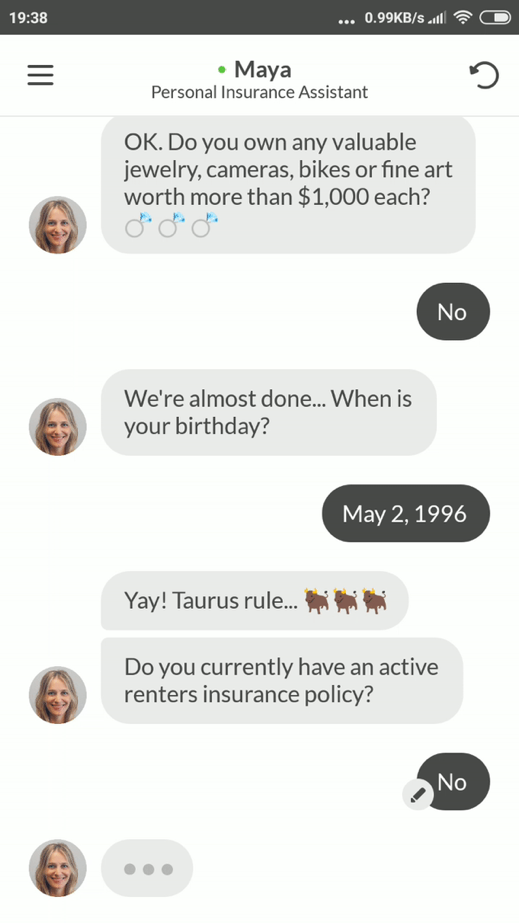 How are Chatbots Useful?

Most PPC campaigns rely on a form to capture leads. Forms are ubiquitous and they get the job done, but they are perpetually weighed down by the simple fact that no one likes to fill them out. At best, most prospects are apathetic to form-filling and at worst (if they are like me) they hate it with a burning passion. Chatbots serve as an engaging alternative to forms. By asking prospects for their basic info one detail at a time through a chat instead of all at once through a form, marketers can give their prospects a never ending stream of visual stimulation as each piece of lead info is rewarded with new bubbles on the screen. Furthermore, since chats are structured as a conversation right from the outset, the whole lead generation process is recast from a one-way interaction where a prospect fills out a form alone into a two-way consultation with a virtual assistant.

This additional engagement means that marketers have more of the prospect’s attention. Increased attention, in turn, has two positive impacts on lead generation output.

The vast majority of the prospects that click on PPC ads drop. A certain subset of these people do so because they simply don’t feel as invested in the lead gen process as they ought to. The increased attention level of a chat interaction ensures that at least some of those leads will not drop. The end result is a higher conversion rate using the same resources.

Traditionally, if a marketer wanted to qualify leads through a form they’d have to add more fields to it. The issue with the this method is that most people don’t have the attention span to deal with a longer form.

Since chatbots are more engaging and grab more of the prospect’s attention, they can ask more questions of a prospect without boring them. Or in other words, they can qualify prospects to a much greater degree without sacrificing on conversion rate.

The concept of a chatbot as a PPC lead capture tool is something I have been experimenting with for the last three months. In that time, I have worked with several businesses, mainly in the B2C services space (e.g. healthcare, insurance, auto repair), who’ve used chatbots to increase their conversion rate in many cases and drop their cost per click in other campaigns (this generally holds true when the campaign in question was previously reliant on click-to-call lead generation).

Perhaps the best case study for the efficacy of chatbots in the lead generation and qualification process however comes from an industry that isn’t normally known for its technological advancement: the DMV.

In 2017, Montana’s Department of Justice undertook an ambitious project to overhaul their Motor Vehicle Division’s website (this is Montana’s equivalent of the DMV). The impetus for the change was a sentiment which most people around the world can agree with: customer experience in DMVs is terrible. Rarely is a single organization so universally reviled. DMVs are notorious for their long lines, complex processes and overworked employees.

To fix this problem, most DMVs (Montana’s included) have built sites containing information that should reduce hassle. The issue however is that like many startups and SMBs, government organizations are often understaffed and lack the resources to hire a team of top developers and UX designers to make a good website experience. As a result, many citizens are forced to physically go to the DMV to find out more or call a customer support line which is equally congested.

Recognizing these problems, Montana’s Department of Justice, deployed 30+ chatbots to ensure that citizens successfully got the right documents filled out. 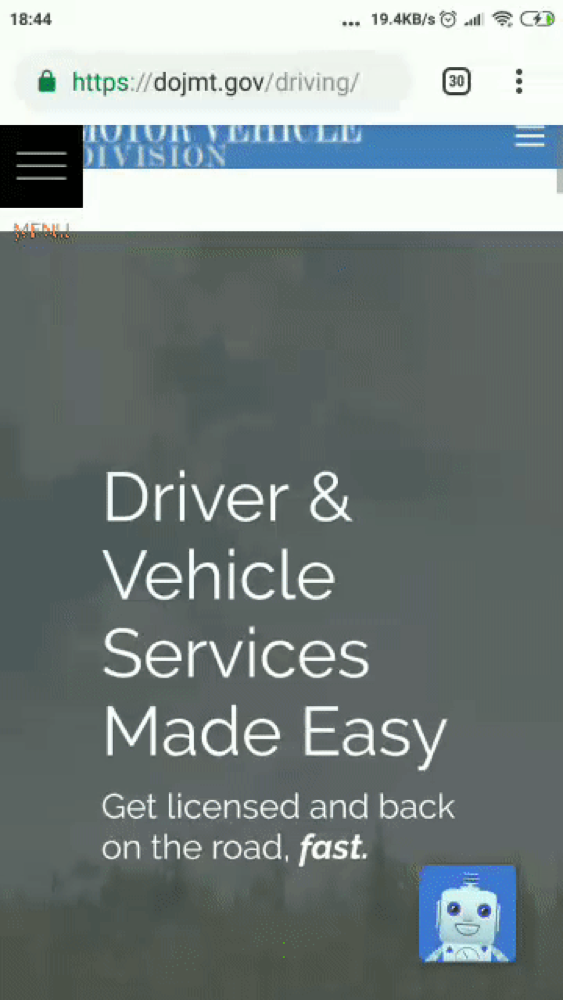 To be clear, PPC lead generation is not as bad as going to the DMV. Most landing pages are better than the average DMV website. But there are uncanny similarities between the two processes. Getting citizens to correctly fill out paperwork isn’t all too different than getting a prospect to provide their lead information.

Both processes require a level of attention that most modern-day individuals simply do not have, and generally involve the successful completion of forms. Or put differently, if you replace ‘citizen’ with ‘prospect’ and ‘DMV’ with a company name in the example I detailed above, it sounds pretty similar to the problems that PPC marketers frequently face.

To actually see any of these benefits in action, PPC marketers need to make their bots reliable (they perform as expected) and accessible (prospects don’t have to jump through hoops to reach the chatbot). This is where the distinctions from the previous section come into play.

Currently only one type of chatbot is reliable and accessible: the goal-oriented, web-based chatbot.

Most PPC campaigns already use web-based mediums as their post-click experience. Using a web-based bot offers continuity and ease of integration. Or put differently, prospects are already sharing their lead info on the web, making it easier for marketers to continue the lead generation process in this setting.

For example, you probably use a web-based analytics tool on PPC campaigns like Hotjar, Google Analytics or Heap. Since web-based chatbots are still just HTML, CSS and javascript under the hood, these tools can be used like a traditional landing page.

However, shifting the lead generation experience to a an app-based bot does the exact opposite. Companies like Facebook own those platforms and they do not allow the same tools to run on the backend. You’d have to recreate your stack from the ground-up. Furthermore, app-based bots are simply not a mainstream form of interaction yet.

If a prospect lands into a Messenger chat when it’s time to generate a lead, they are going to feel disconcerted and apprehensive about the interaction. At Tars, we’ve found this effect to be so acute with our clients that we have shut down our Facebook Messenger integration altogether. Messenger bots certainly do have some commercial value, but in the realm of lead generation, they just don’t work.

Leads are generally comprised of information that is unique to each prospect (name, email, etc). Collecting these forms of information through a chatbot can easily be done through a hyper-focused goal-oriented bot, which has UI dedicated to each field. In Lemonade’s Maya Insurance agent, for example, they use quick reply Yes or No buttons at several stages of the chat to advance the conversation.

Yet, when I speak to marketers about their chatbot aspirations, they picture the end result as a hyper-intelligent sales rep that has a deep understanding of user queries that sits squarely on the chit-chat end of the spectrum.

Other than the fact that using an AI-powered chit-chat bot to capture someone’s email is a tad bit overkill, chit-chat bots are generally unready for primetime. The state of commercially available AI APIs today is such that any attempt at making a super-intelligent sales rep inevitably fails. Resulting bots are simply unable to answer all user queries, and after a point they begin to feel like a “glorified search bar.” Such failures ruin user experience and inevitably nullify any of the advantages a chatbot would otherwise have for the lead generation process. 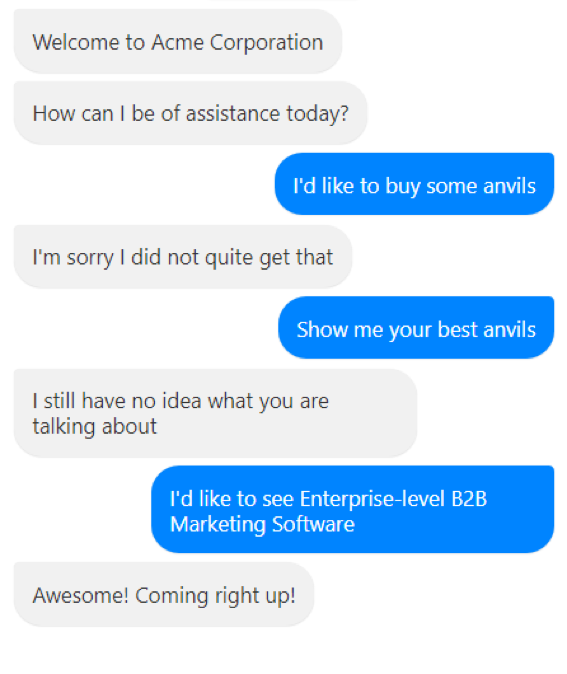 A lot of the buzz surrounding chatbots in the marketing space is overblown marketing hype. Most marketers that integrate chatbots into their stack do not understand why or how they can effectively use the technology and are just using it because they see everyone else doing it.

This doesn’t mean that the technology is a complete farce. Chatbots are in fact a great way to capture and qualify leads. The engaging nature of conversational interactions means that chatbots can liven up the lead generation process and grab more of a prospect’s attention.

The end result is a shortened sales funnel with more highly qualified SQL-like leads entering at the top. This benefit, of course comes with a significant caveat. Chatbots are not a monolithic technology. There are several variations, many of which don’t have the positive effect I mentioned above.

At least as of today, only goal-oriented web-based bots can deliver results. The marketers who recognize this aspect of chatbot technology will see the biggest gains.