After over six months of working off of a sad, creaky, folding card table in my living room — awkwardly and uncomfortably shoehorned in between my coffee table, my couch, and the door to my patio — I just finished redoing my entire living room setup with a refreshed work-from-home space, complete with a new desk: 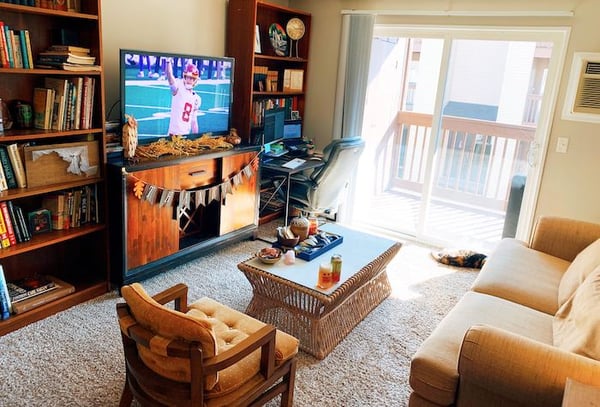 No more constantly tripping over my work or trying to peer over my chair and monitors to watch television from the couch! 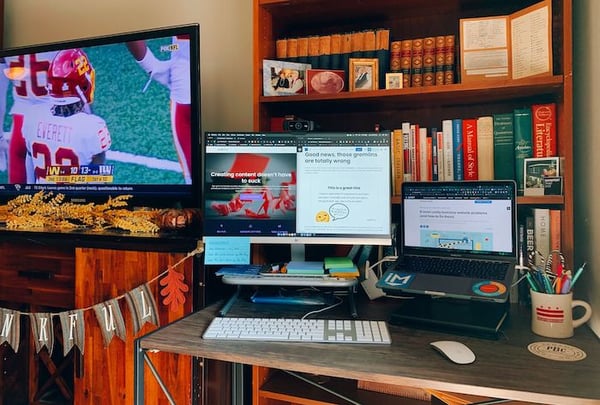 No more chaotic work days with monitors tipping into each other and things falling over, because I’m working on a card table that’s bowed under the weight of all of my equipment and work stuff!

Many of you have likely gone through some form of similar transformation, adapting to a more long-term reality of working from home. Unlike some of you, however, I have not brought my workout routines into my home, post-coronavirus.

🔎 Related: How to stay positive and productive while working from home

More specifically, I’m not one of the thousands of exercising masses who transformed luxury stationary bike and treadmill manufacturer Peloton into a pandemic success story with 172% surge in sales, as many sought to stay active while quarantined.

Although they caught heat for “Peloton Wife” — what some called a “sexist and dystopian” advertisement that went viral for all the wrong reasons — the brand, for the most part, has remained a favorite coveted “it” solution for those who want to work out at home.

For example, a couple of months ago, IMPACT CEO Bob Ruffolo and VP of Revenue Melanie Collins had a friendly competition of who could do the most rides over a 12-week period.

Oof, let’s begin with the facts: 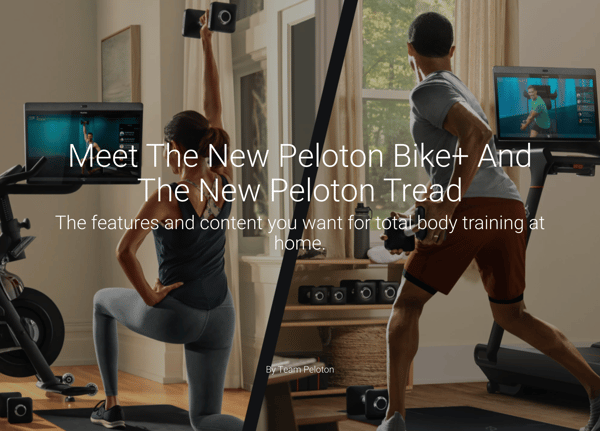 On a warm September morning, the folks at Peloton dropped news that should have been met only with excitement and applause — they were launching a new Bike+ and Tread products.

In their announcement, Peloton founder and CEO John Foley said:

“When we launched Peloton, we knew we were onto something special. Now, eight years later, we have a passionate global community of 2.6 million Members, and we feel like we’re just getting started in terms of how we can impact the health and well-being of people worldwide through our platform, content and products.”

In a surprise to no one, rumors of this announcement had been circulating online the week prior to the release. And not everyone was happy about it. Specifically, folks who had recently purchased a bike were annoyed that the now-obsolete version they were still waiting to have delivered were now priced lower, to make way for the new Bike+.

🔎 Related: How one of the hardest times in my life was made worse by poor UX

I know this because IMPACT COO Brie Rangel was one of those very people. Leading up to the announcement — and when it finally dropped — Brie and many others were left scrambling trying to figure out what to do.

And the folks at Peloton didn’t really handle the first 24 hours very well.

The not-so-great customer experience of the Peloton Bike+ release

Although the Tread release seemed to go smoothly, the Bike+ is what created the customer experience issues. According to Brie, here is how events played out:

Unfortunately, the email left much to be desired

For Brie and others who received the email explaining how to resolve the issue of their desire to switch out their old Bike purchase for the new Bike+, the “solution” was not so hot:

The email prompted those interested in the trade to click-through to a landing page with a form to submit the upgrade request.
Only after they submitted their information (and agreed to giving up your current delivery date), they were told on the thank you page that they would have to wait another five to 10 days to even get a response.
Of course, the form broke and many people could neither make the request or get ahold of a human to fix the issue during the day of the release or soon thereafter.

To those who could get through… well, they had to wait about two weeks to even have someone look at their request. That meant those who had already paid Peloton for their new bike would be prioritized weeks and weeks behind those who were able to secure a Bike+ ahead of them.

Focus on your current customer experience

For the most part, Peloton-focused online forums and groups have returned to places of celebration for the products, and this bungled release did not do irreparable harm to the brand.

That being said, the day-prior and day-of issues customers experienced during the Peloton Bike+ release is a cautionary tale all digital marketers and customer experience professionals must learn from.

🔎 Related: How brands are adapting their customer experience in COVID-19

When Brie slacked me about what was happening, I was completely floored. One of the most important things a business should be focused on right now is keeping their current customers happy. Not only is it easier and more cost-effective to drive sales from current customers than new ones, it’s also more critical than ever to keep those current customer/client relationships healthy when economic times are turbulent.

Or, more to the point, it’s much easier for a business to go under when they’re constantly losing customers as they’re bringing them on. You might be OK for a little while, but that kind of churn and over-reliance on always bringing in new customers is not a sustainable growth strategy.

So, here’s what you need to keep in mind

Look, most companies are not operating at the Peloton level, with increased popularity and scrutiny brought on by a very specific confluence of events. That being said, whether you’re planning a product release or announcement, or you just have current customers you need to keep happy, remember:

You should always over-prepare for any announcement that may cause an influx in service request volume. So, staff up, train your people, and be ready. It doesn’t matter how big or small your team is, don’t leave yourself open to surprises because you were overly optimistic. (I used to run a team of customer service reps at LivingSocial, and we prepared for massive selling events the way small countries prepare for battle.)
Test your conversational marketing channels and (again) staff up, as needed, if you have any potential surges on the horizon — for example, if you’re an e-commerce company preparing for Black Friday and Cyber Monday, things could get wild. Plan accordingly.
Don’t pull the plug on service channels if at all possible. That is a quick way to make people really, really unhappy and turn to the internet to air their grievances. I understand why Peloton shut off chat, but they should have been prepared, so that necessary step just made them look bad.

Finally, don’t show that you take your current customers for granted

Even though the dust has settled, the message Peloton sent over that 48-hour period to those who had just shelled out a ton of money on their product was clear. They were not as important as attracting net-new buyers of the Bike+.

I’m sure that’s not how they actually feel or what they intended to communicate. They aren’t nefarious luxury exercise equipment overlords with malicious intent to make people miserable.

🔎 Related: 4 easy ways to deliver a sales experience your customers will love

Still, the Peloton team clearly didn’t think through the experience of those existing buyers, how they might feel annoyed at the new announcement, what their customer experience should be, and so on.

Their experience should have been as seamless, thoughtful, and built with purpose as it was with those who were going to be new to the Peloton family. Instead, they were hung up on, asked to wait weeks for an answer, and served up faulty tools and communication channels.

Top 10 Takeaways I Learned From Conferences This Year