Suresh (name changed for anonymity) was in dire need of money to perform the last rites of his father. Instead of seeking help from people he knew, he decided to approach an NBFC for a small amount. But despite earning a decent salary, his request was turned down based on the NBFC’s default in processing some EMIs towards the parent bank.

The loan denial had nothing to do with Suresh’s background or credibility.

Sometimes, a trigger is all that is needed to give birth to a multibillion-dollar idea.

The concept has been around for a decade but regained its mojo a few years back, with LenDenClub emerging as its poster boy.

From processing 20 loans per month for the first few months in 2015 to reaching 20,000 loans per month in 2021, the startup became the first P2P platform in India to hit profitability this year. The platform has been on the up and up since 2015, on the back of technology and strong product focus.

Having worked as an NBFC consultant for over 11 years, Bhavin had experienced the struggle to raise capital for NBFC first-hand — apart from witnessing the mismatch between loan providers and seekers.

Witnessing Suresh’s problems just to get a small-ticket loan on an immediate basis led Bhavin to take his entrepreneurial plunge for the second time. (His earlier startup was called Span Analytics, an NBFC consulting firm).

“It was high time to look at some alternatives for the way people accessed loans besides figuring out a model that was open on the capital side. NBFCs have immense potential but struggle to grow beyond a certain extent due to unavailability of capital and too much dependency on equity and bank capital,” says Bhavin, who started looking for a partner as soon as he decided to get into the P2P lending business.

The hunt went on for about a year before he collaborated with Dipesh, who had a strong background in tech. The duo co-founded the platform in 2015.

A P2P lending platform acts as a marketplace for individuals to lend or borrow money without the involvement of any financial institution as an intermediary. These tech-driven platforms carry out the transactions, taking care of due diligence, and setting the interest rate based on the borrower’s profile.

A lot of startups undertake a survey before launching their product. The founders of LenDenClub, however, wanted to take the ‘on job survey’ approach as they did not want to be constrained by the survey sample, given their limited budget.

“It was better to launch the service and evaluate the market to understand the kind of difficulty people face,” Bhavin says.

The duo outsourced the first version of the platform and commenced operations from their homes. The platform started receiving two to five customers every day, and the number grew gradually. Within six months, LenDenClub was processing around 20 loans worth Rs 5-6 lakh in all per month.

“For the initial few months, we called up each and every customer (borrower and lender) to understand the pain points and get feedback,” Bhavin says.

It took 58 days for the company to disburse its first loan – this time frame was reduced to 48 days within four months. Today, the platform manages to disburse a loan within two hours.

“This came from understanding the customer on both sides. You will not get everything in one go. It has been built up gradually,” Dipesh says.

Slowly, the processes were set and ready to be scaled up, and the founders began looking for capital.

Within seven months of operations, the startup raised seed capital from Venture Catalyst, with whom, according to the founders, their “synergies matched”.

“We did not have any institutional name behind us. The only thing we had was our experience as co-founders before LenDenClub. Our capability was on the execution side and the fact that we were not burning money. Whatever we were earning was enough to cover marketing, operations, salaries, and other expenses,” Bhavin says.

The team started to expand as soon as the funding came in with dedicated resources for operations, sales, marketing, design, tech, and customer care.

LenDenClub moved away from the outsourced platform and launched its in-house version with an open-source technology to bring in development at a faster rate.

In September 2016, the startup made its first rupee and reached breakeven. By this time, it was processing about Rs 40-50 lakh worth of loans per month and had expanded to new cities, including Bengaluru and Pune.

Within eight months from breaking even, it was time for the next phase of growth, which was propelled by the pre-Series A fund of Rs 3.5 crore from Mumbai-based Artha Ventures.

The timing was perfect. Amidst the deal came RBI regulations on P2P lending, and funds were required to meet the regulatory requirements. This was very well envisaged by the founders and set in well with the deal, negating regulatory pressures.

LenDenClub was restricted to offering personal loans to salaried customers — a product being offered across banks and NBFCs.

“We realised that customers always had small requirements. So rather than running after them for long duration loans, which even other lenders were offering, we started focusing on smaller ones and aimed to become experts in that area,” the founders say.

In May 2018, LenDenClub launched InstaMoney for customers in the salary range of 30-35K per month and looking for loans of Rs 5-10k. Within three months, the platform was able to disburse small-ticket loans (five to six months’ tenure) within 24 hours, which eventually came down to two hours.

The product became an instant hit and the numbers started growing. The repeated user ratio was improving, and to date, this has been one of the most prominent products of LenDenClub.

By the end of 2019, the startup tied up with another P2P lending platform, Loanmeet, and shifted focus towards merchant loans, which forms 75 percent of the company’s disbursement today.

Launching InstaMoney was a part of LenDenClub’s strategy to move towards becoming a tech-driven startup as the product introduced the customer to a digital system.

A customer is able to avail of a loan under InstaMoney within 10 minutes — 11 minutes application, 30-second verification, and lending completed in the next 13 seconds, except disbursal, which has certain requirements.

“We set a record of doing this entire process – from onboarding to disbursal – within 18 minutes, just to test our limits,” says Dipesh who takes immense pride in the startup’s strong backend tech.

The platform gets over 2.5 lakh applications every month, of which only 20,000 are disbursed.

Different stages of filtering and criteria have been set up. Strong backend algorithms are used to create a borrower’s risk profile and the decision of lending is made on the basis of the credit model created. The risk profile is evaluated and the interest rate is decided based on tech-based due diligence. The model is proprietary to LenDenClub, says Dipesh.

The platform uses customised auto calling bots post disbursal of a loan. With 80,000-90,000 customers paying EMIs each month, setting up a call centre would have required a team of at least 100 people. However, with tech, the number is zero and a process of merely three to four hours, including follow-ups.

“90 percent of our process is automated, which is the reason we have been able to sustain ourselves even with a smaller ticket-size loan,” the co-founder says. 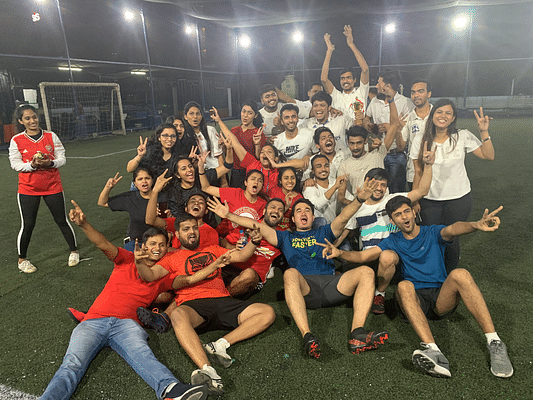 In 2018 end, LenDenClub tried its hand in the Buy Now, Pay Later (BNPL) category by partnering with Flipkart. Somehow, the product didn’t work for the startup.

“There were a lot of customer support issues from the sellers’ side and EMIs suffered. We couldn’t fulfil requirements and dropped the plan after six months,” Bhavin says.

Learning from the experiment, the startup is now building a similar product “in a completely different way” and is due to launch it in the next four to five months.

“If you don’t experiment, you wouldn’t learn,” the founding duo says.

A foundation of tech

LenDenClub prides itself on thinking about “tech first” and in its tech-backed platform and architecture, which “no other player possesses”.

“We do not launch any product without tech. We have been able to process such heavy applications only because of our tech-driven approach and scalability prowess. Today, more than 80 percent of customers are approved automatically, and we do not think twice before adding new products and services,” Bhavin says.

Besides tech, the startup benefits from a strong focus on the specific product and strong execution.

“We do not jump into any product. We understand each and every rupee coming in and going out. That is one of the reasons why we hit profitability, something other companies are still struggling with,” Bhavin says.

The founders claim to have a stronghold on unit economics, a reason for their green balance sheet. Providing short-tenure loans and building a simple business model has also worked in the company’s favour.

“We were able to see the outcome of COVID recovery issues, which a lot of P2P and digital lending players struggled with as their loan tenures were much longer leading to restructuring. This is one of the reasons why our NPAs are maintained at 3.95 percent,” Bhavin explains.

How to start a P2P Lending Platform in India?

Outlook for the future

LenDenClub registered loan disbursements close to Rs 600 crore in FY21 as against Rs 60 crore in FY20 and Rs 13 crore in FY19. The company reported year-on-year growth of 1,000 percent, catering to over 1.3 lakh unique borrowers.

As it eyes further growth, the focus will remain on its two main products — InstaMoney and merchant loans.

“We have been growing 6-7X in the last three years. We target to disburse around loans worth Rs 1,200 crore and want to reach a monthly average run rate of Rs 2,500 crore by the end of this fiscal,” Bhavin says.

Despite apprehensions during the pandemic, the 75-member team startup did not stop disbursements and was delivering in April-May 2020 as well.

The business was a little slow in Q1 2020, says the co-founder, but it started picking up in the second quarter. “In fact, we closed our default numbers slightly better than the last fiscal,” he adds.

The startup’s recent product, InstaMoney Plus, allows selected customers to use the company’s UPI and card-based product – they can use it online or offline. The product already has 2.5 lakh borrowers.

“New features and products are lined up. We want to make lending technology as adaptable as payment gateways so that the next revolution could be in terms of credit availability in India. This is already happening but we want to tap Tier I cities and expand to Tier II India as well,” Bhavin says.

Pfizer’s Unconscionable Crimes, Past and Present

Blockchain Is Eating The World

Everything You Need to Know About Lead Generation