The entrepreneurial calling came to Saumya Shah when he was in Class 5 — he started his first business by selling Diwali greeting cards to residents in his locality and social circle.

But it wasn’t until an internship with Morgan Stanley Mutual Fund — where the investing world caught his attention — that he decided to combine his two loves, business and investing.

As an undergraduate, and especially after the internship, Saumya found a lot of his friends were asking him for investment advice. Those friends roped in other friends, and Saumya soon found himself helping a large audience navigate the world of financial investing.

Even after he moved to the US for work, he realised that even the most upwardly mobile professionals needed help and hand-holding in investing — and that was the epiphany that brought Tarrakki to life.

Founded in 2018 by Saumya and Shaily Shah, who holds an MS in finance from The University of Texas at Dallas, ﻿Tarrakki﻿ is a full-stack wealth management platform that aims to help people invest smartly by giving them different investment options, and unbiased investment advice.

However, its true potential lies in its ability to get the masses to participate in the markets via investment instruments, and it does this by providing investment options for as low as Rs 100.

“Our vision is to make investing easy and affordable, provide financial security to masses in India, and make the investment process fun,” Saumya tells YourStory. 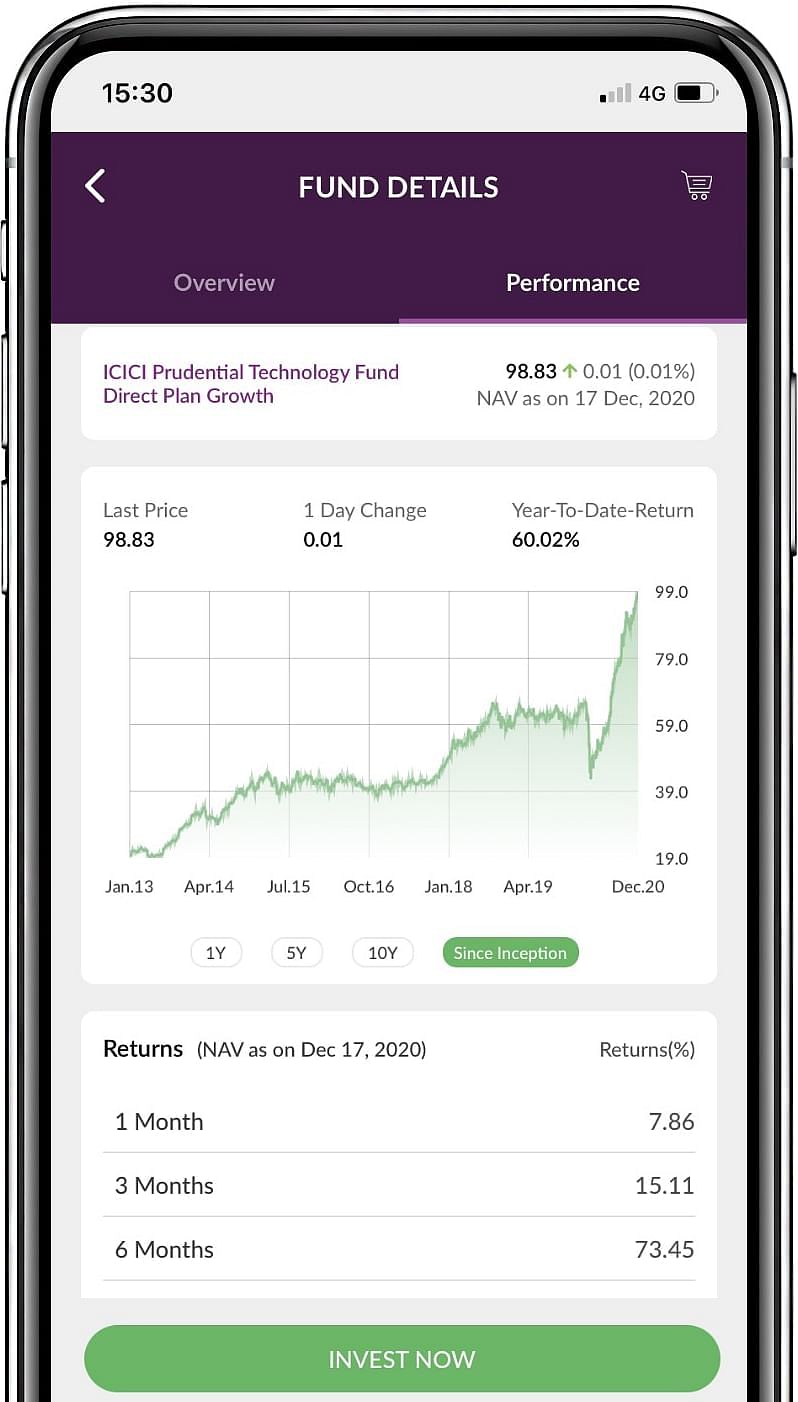 “The entire flow of investing from onboarding a user to making an investment is paperless and hassle-free. The app is fairly simple and straightforward; built in such a way it makes investing easy for even first-timers — all one needs is their PAN number and bank details to get started,” he adds, commenting on the ease-of-use of the platform, which also has an important function in appealing to the mass.

Saumya and his wife, Shaily, along with Shriram Sharma — one of the youngest chartered accountants in India, aged 19.5 years — run Tarrakki out of Ahmedabad, Gujarat, where they not only continuously work to demystify the world of finance and investments, but also manage their passion project — Rural Invest, a personal finance startup led by school children.

A unit of Tarrakki, Rural Invest was designed to create financial literacy in school children and young investors, so they could get used to the parlance of finance at an early age.

Tarrakki’s app has seen over 26,000 downloads and over 13,000 users so far. It has already processed transactions over Rs 50 crore to date.

Tarrakki’s stack includes various products that help democratise investing in India, right from providing options for education and awareness, to investment advisory. It has six offerings on its platform currently:

Zero-commission direct mutual funds: This helps make mutual fund products cheaper and more pocket-friendly.Tarrakki Zyaada: In partnership with Nippon India Mutual Fund, this offering starts for as low as Rs 100, which gets invested in a liquid mutual fund. The unique thing about this product is that it offers users an investment-linked VISA debit card, which allows them to make purchases and spend from the investment made, keeping the remaining balance invested. The benefit of this product is that it lets people keep their money invested, and, at the same time, provides some liquidity in case of emergencies.Tarrakki mutual funds assistant: Provides buy-sell-hold recommendations on mutual funds so people can easily understand what could give them better returns. The MF assistant also nudges people when they place an order for a mutual fund product that has a SELL rating.Peer-to-peer lending: In a bid to help users diversify their offerings, Tarrakki offers them the option to invest in P2P lending, in association with industry partners.Investing for minors: Taking a leaf out of his own book when he started investing at age 15 but couldn’t find a digital platform or an easy way to do it, Saumya decided to add this option so that everyone can take advantage of financial instruments. “Tarrakki’s youngest investor is a nine-month-old toddler whose parents are saving for her education via an SIP,” he says.Equity advisory: Perhaps the most important feature of the wealth management platform, the equity advisory product provides subscribers well-researched model portfolios, and tells them what, when, and how much to buy. More importantly, it also tells investors when to sell. 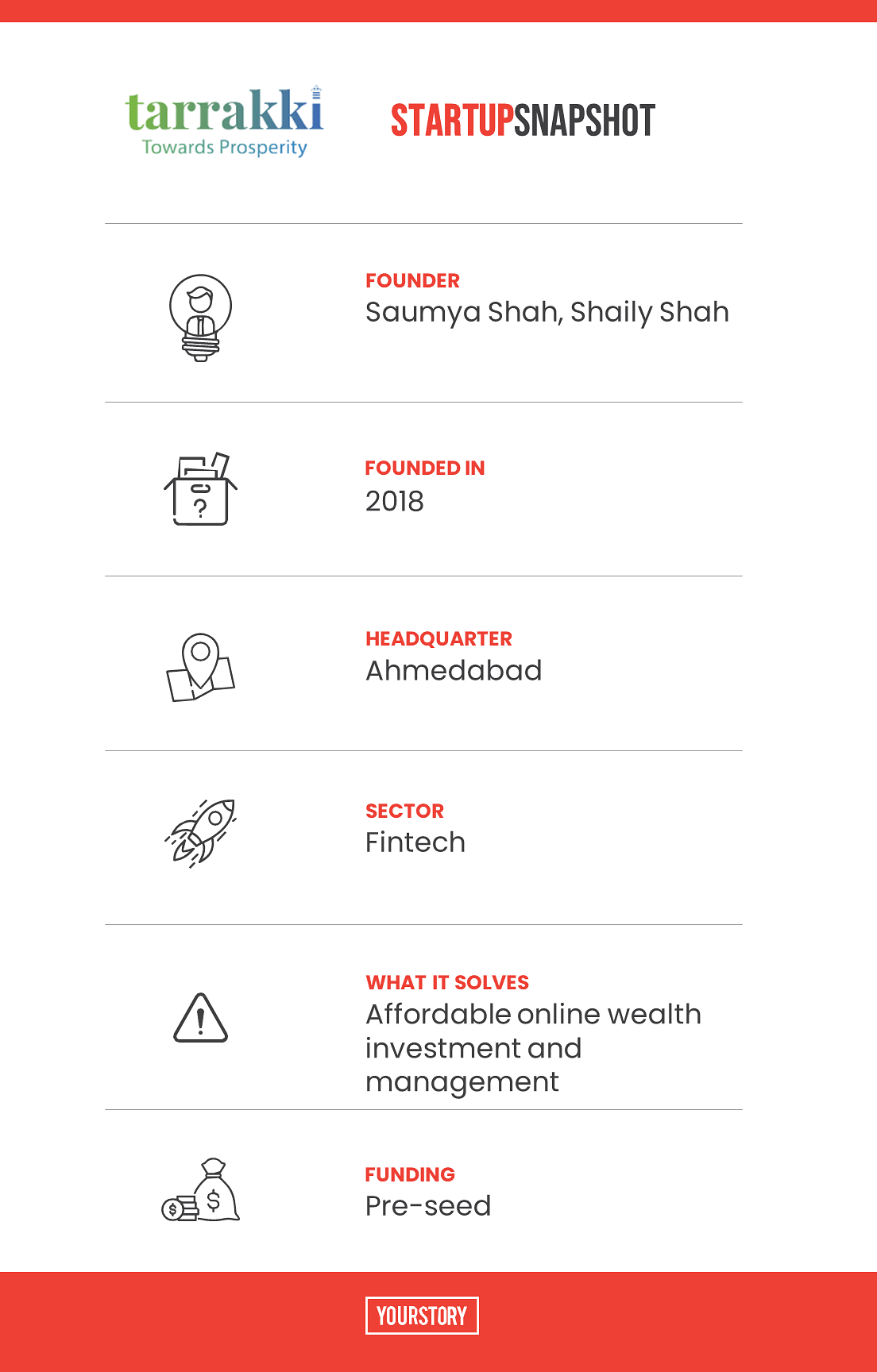 Tarrakki earns most of its revenue from its equity advisory offering, which, priced at Rs 550 per month, is at 1/4th the cost of similar products provided by competitors. It also provides a subscription-based investment advisory package for mutual funds and equities, plans for which start from Rs 275 a month. The plan gives users access to premium features such as Tarrakki MF assistant, and dedicated investment advisors.

For alternative investments such as P2P, the startup earns commissions from distributors.

Tarrakki’s competitors include the likes of ﻿Zerodha﻿, ﻿Paytm Money﻿, ﻿Groww﻿, ﻿Upstox﻿, and others that provide investment options and advisory services.

The startup has raised $225,000 in funding so far from investors such as Kiran Shetty, CEO and Regional Head India and South Asia at SWIFT; Asit Oberoi, Managing Director, Asia Pacific, at Buckzy Payments; and Safir Anand, a well-known investor, IP lawyer, and strategist.

Tarrakki is currently heading for a pre-series A round in the following months, Saumya says.

[App Fridays] This ‘Made in India’ app helps grow your money by investing in mutual funds, stocks, gold, and more

Over the last four months, Tarrakki says it has seen a 2X growth in its user base, and is optimistic of hitting a million users in the next 18 months. However, Saumya says financial illiteracy is still a huge barrier to entry for most Indians.

“Indians tend to leave their monies idle in a bank account or stick to fixed deposits that don’t even beat inflation,” he says, adding he hopes that changes with a solution like Tarrakki.

“Our audacious goal is to have 50 million users in the next five years. We are also looking to not only focus on individuals, but also build a product where non-individuals like HUFs, trusts, companies, minors, and NRIs can also have a seamless digital investing experience.”

In contrast, China has 12.7 percent of its people invested in the stock market, while the US has 55 percent in stocks either individually, or via a mutual fund.

6 traits to look for in an inbound marketing agency

How Marketers Should Deal With the Delta Variant According to Data